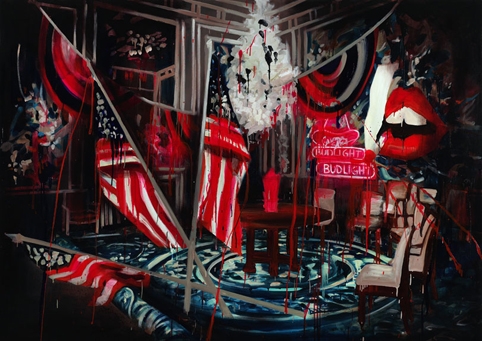 Galerie Nathalie Obadia is putting on Rosson Crow’s second exhibition in France. The first was With Love, from Texas, which brought this young artist born in Dallas Texas in 1982 to public attention here in 2005.

Nathalie Obadia discovered the work of Rosson Crow in Yale where she was completing her degree at the age of 23. She said she felt the same powerful impression as she had on seeing early works by Fiona Rae in 1990 when the artist, aged 27, had just left Goldsmiths College in London. These two artists have the same formal power, the same talented way with colour. Rosson Crow’s paintings are highly sophisticated pieces of pyrotechnics that convey a unique creative energy.

Rosson Crow has a perfect grasp of the history of painting. One of her teachers was Peter Halley and she is fascinated by the history of Europe and especially France history in the 17th and 18th centuries. When living in France in 2006 she visited numerous historical sites such as Versailles, Fontainebleau and the Loire châteaux, and soaked up the atmosphere of the Hôtel Ritz and the Louvre. Returning to Los Angeles, where she has been living since 2007, she took books on 18th-century furniture, the gardens of Le Nôtre and Classical interiors…But Rosson Crow is very much a young American, and more particularly a Texan, from a state that is proud of its unique position in the history of the United States. The artist explains that she loves to paint opulent, open spaces and places of power where masculinity is acted out. The oil derricks, the gunsmiths, the rodeos, the saloon bars, the nouveau riche interiors and the garish neons are all “affirmative” signs of a culture that is asserted and treated the way only a great painter knows how. Crow transcends her subject, be it everyday life, popular culture inspired by Hollywood, or pop and rock music, to produce complex paintings that mix the old and new worlds.

Crow is a talented chronicler of the globalisation of cultures and of the complexes evinced by each one. Versailles goes contemporary with Jeff Koons in Jeff Koons at Versailles and the American bar takes on a Classical décor in Haves and Have-nots (Ciccones). In Salon de Réception avec Bud Light, in which American flags vie for room with Empire furniture, we realise that the cultural issues at stake in globalisation are just as important as the territorial ones. Bright colours, drips and blurs show that we are a long way from Classical harmony and the hegemony of the model. The culture clashes are prominent and dissonant. The Pop artists Andy Warhol, Roy Lichtenstein, and Jeff Koons twenty years later, expressed a rather imperialist vision of American art. An artist of the third millennium, Rosson Crow gives a more multicultural image of America and the West. In this sense, her painting is highly contemporary, even if it also evinces the classical handling of a major artist.

The show runs through till the 23rd January. Galerie Nathalie Obadia