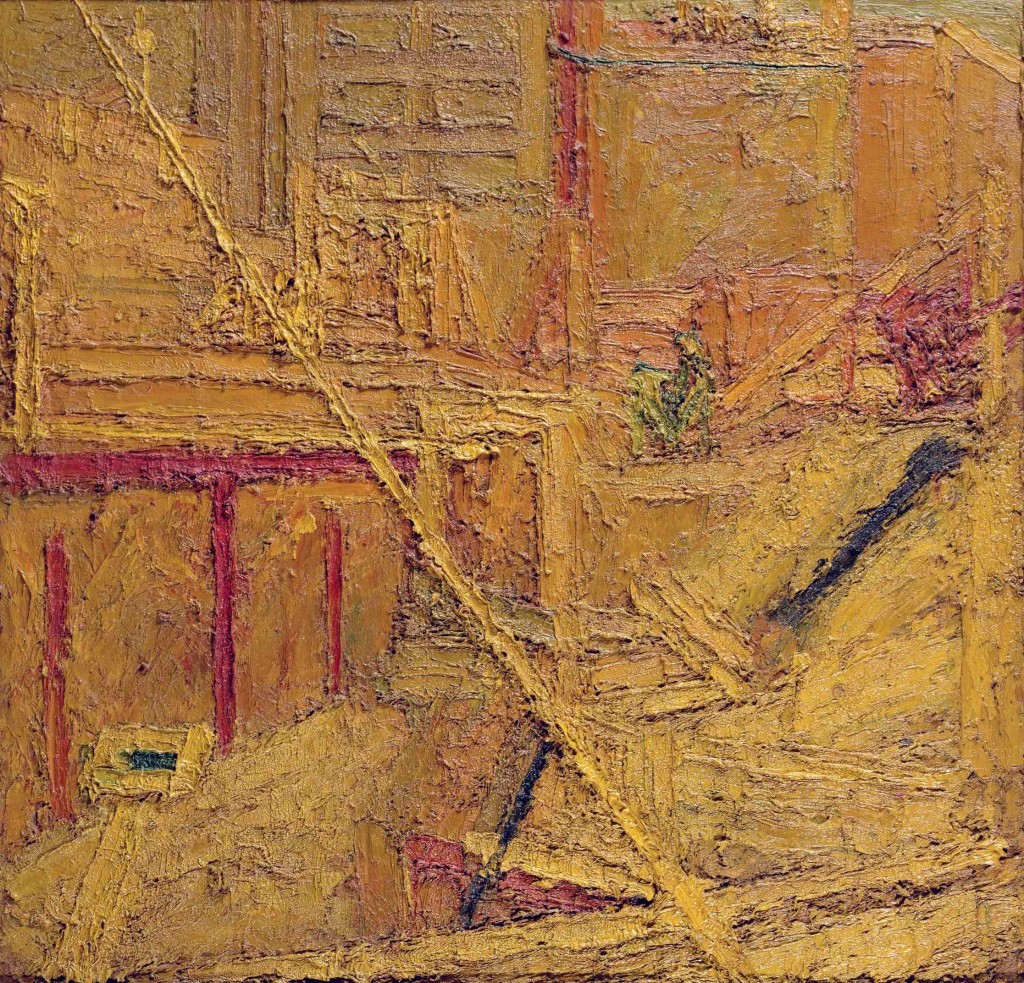 This exhibition explores an extraordinary group of paintings of post-war London building sites by Frank Auerbach (born 1931), one of Britain’s greatest living artists.
The series of fourteen major paintings was produced during the first decade of Auerbach’s career and gives a remarkable account of his early artistic development.

It was during this period that Auerbach emerged alongside Francis Bacon and Lucian Freud as part of a powerful new generation of British painters. Frank Auerbach:
London Building Sites 1952–62, on view at The Courtauld Gallery Through to 17 January 2010, will give the first comprehensive account of these works, which are among the most profound responses made by any artist to the post-war urban landscape.

Auerbach’s years as a young art student in London, from 1947 to 1952, were spent in a city deeply scarred by the aftermath of the Second World War and at the beginning of a long period of recovery and rebuilding.

The Blitz had levelled whole areas of London and left numerous buildings severely damaged or destroyed. This wounded landscape was punctuated by remarkable survivals, most famously St Paul’s
Cathedral standing defiantly among the ruins. Another spectacular sight was the rebuilding effort which saw armies of workmen clearing the debris and excavating new foundations. Ubiquitous symbols of the rebuilding were the tower cranes which sprang up across the city in advance of the new steel-framed offices and blocks of flats which were to transform London’s urban landscape .

For Auerbach, hungry to prove himself as a modern painter, the building sites of London made the most compelling of contemporary subjects. As he recalled recently, “London after the War was a marvellous landscape with precipice and mountains and crags, full of
drama… and it seemed mad to waste the opportunity and not to take notice of the fact that there were these marvellous images… all around one”.

Towards the end of his studies at various London art schools including, most importantly, David Bomberg’s inspirational teaching at the Borough Polytechnic, Auerbach began voraciously sketching the city’s building sites, as did his close friend and fellow student, Leon Kossoff. There was, Auerbach says, “a sense of survivors scurrying among a ruined city… and a sort of curious freedom… I remember a feeling
of camaraderie among the people in the street”. For Auerbach, the sense of survival must have seemed particularly profound. He had been sent to England from his home city, Berlin, shortly before his eighth birthday and the outbreak of war. Both of his Jewish parents were killed in the concentration camps and Auerbach made London his new home. He combed the city, filling his sketchbooks with details of
particular sites, capturing the activities of workmen and machinery as they reshaped London’s bombsites into new structures. He recalls how he would enter a site “by inching along the planks, out over the excavation, just clinging on and dodging the wheelbarrows”. It was the early stages of a construction site that most excited Auerbach, before the building had fully emerged from the ground and there was still a
sense of struggle between the formlessness of the raw earth being excavated and the beginnings of architectural order.

Auerbach’s first painting, in what would become a group of fourteen major works, was Summer Building Site, 1952, a construction site on the Earl’s Court Road. It was a breakthrough work for the twenty-one year old artist and he considered it to be his first trul y original picture. “I had done my own painting,” Auerbach recalled, “Ididn’t know if I would ever be able to do it again, but at least I knew what it felt like.”

Paul’s ART STUFF on a train # 71: ‘Hurry along!’
Something For The Weekend: +100 The London Group Today Exhibition.