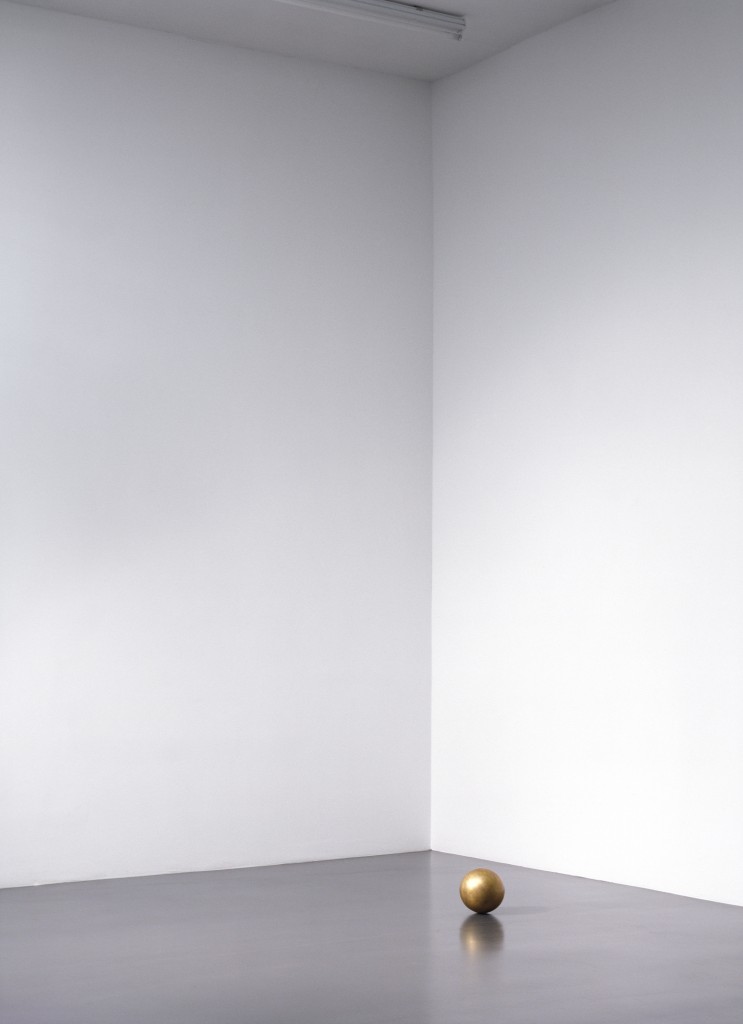 Kris Martin 100 Years, 2004 Mixed Media Size: 20 x 20 x 20 cm Courtesy Sies + Höke, Düsseldorf
http://www.royalacademy.org.uk/exhibitions/gsk-contemporary-season-2009/
It seems that climate change is on everyone’s minds these days. What with the Copenhagen Climate Summit taking place this week and 2015 (according to scientists, the cut-off point after which our emissions need to be drastically reduced) round the bend, everyone, it seems, has fierce, virtually unshakable opinions on it. More and more documentaries, festivals and exhibitions, to name just a few, are addressing these contentious issues.

‘Earth: Art of a Changing World’, set in the Royal Academy’s majestic Burlington Gardens, is the latest such exhibition. Co-curated by Kathleen Soriano, David Buckland and Edith Devaney, this exhibition brings together 35 leading international artists who reflect on climate change, whether with new commissions for the exhibition or with past works. The show, problematically sponsored by GSK, is one of the most compelling and beautiful – some argue overly aestheticised– to tackle climate change. 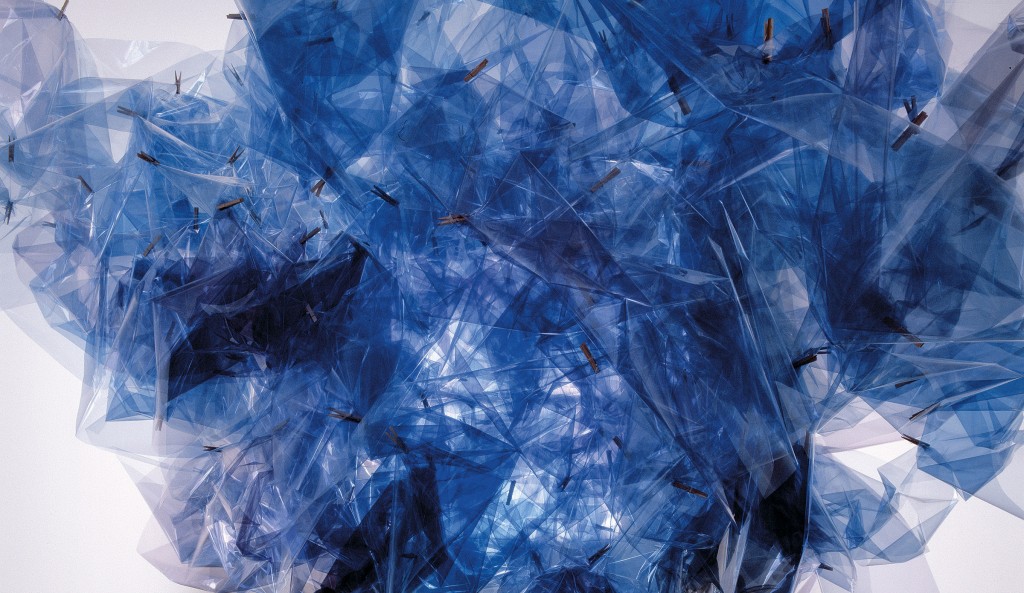 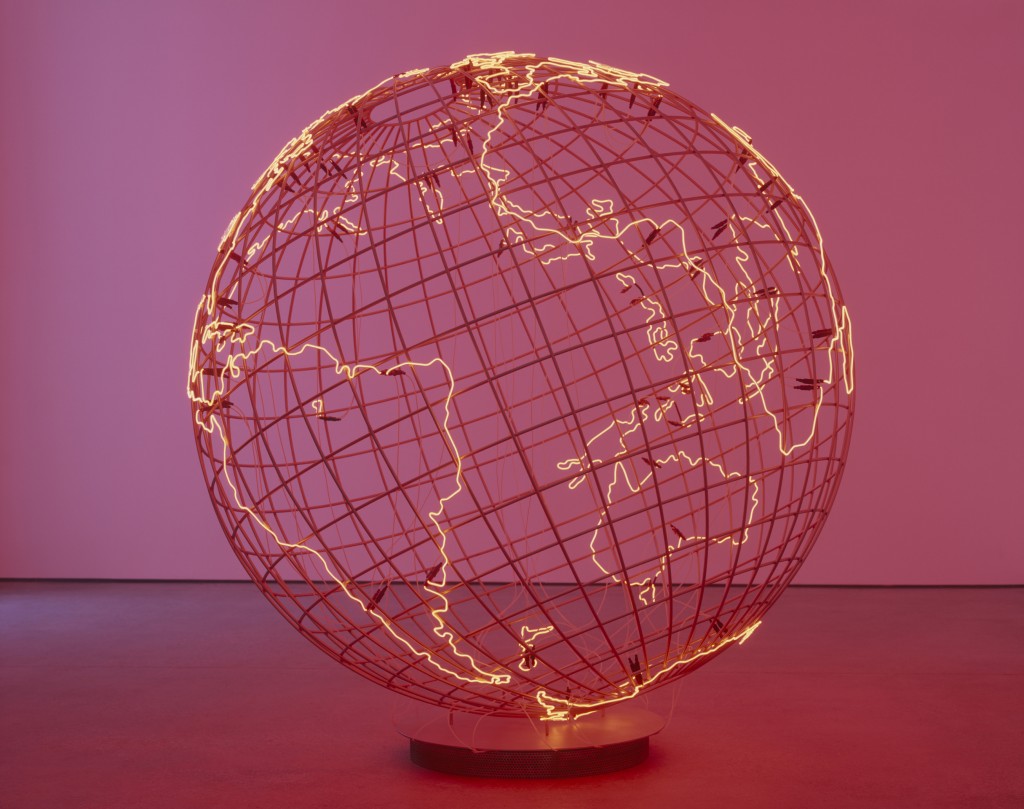 Mona Hatoum Hot Spot, 2006 Mixed media. Stainless steel and neon tube 234 x 223 cm David Roberts Collection, London
Walking up the stairs, the viewer is confronted with Mona Hatoum’s pulsating ‘Hot Spot’ (2006). This minimalist, stainless steel sculpture of the earth tilted on its axis reduces the planet to its skeleton: its shape is given by joining the meridians and latitudes in fine steel, while its continents are delineated in flaming red neon poles. Hatoum’s earth thus resembles a steel cage – one which sizzles with conflict and potential oncoming natural disasters. It is at the same time incredibly tantalising as it is chilling in its powerful message.

Round the corner from ‘Hot Spot’ is Antony Gormley’s eerie ‘Amazonian Field’ (1992). Tiny, shapeless, ghost-like creatures cover every inch of the floor of one of the gorgeous, neo-classical high-ceilinged rooms of Burlington Gardens. Made from varying shades of terracotta, the figurines look as if they were the spirits of a burnt forest. To those of us who grew up obsessively watching Disney’s Little Mermaid, they will bring to mind the tragic, worm-like creatures, once beautiful and vital merpeople, brutally transformed by the witch Ursula and now mere food for her. Similarly, in ‘Amazonian Field’, the little creatures of Gormley look up at the viewer questioningly, some with arms outstretched, almost prompting us to look away in shame as we are confronted with our responsibility for the planet’s past and future. 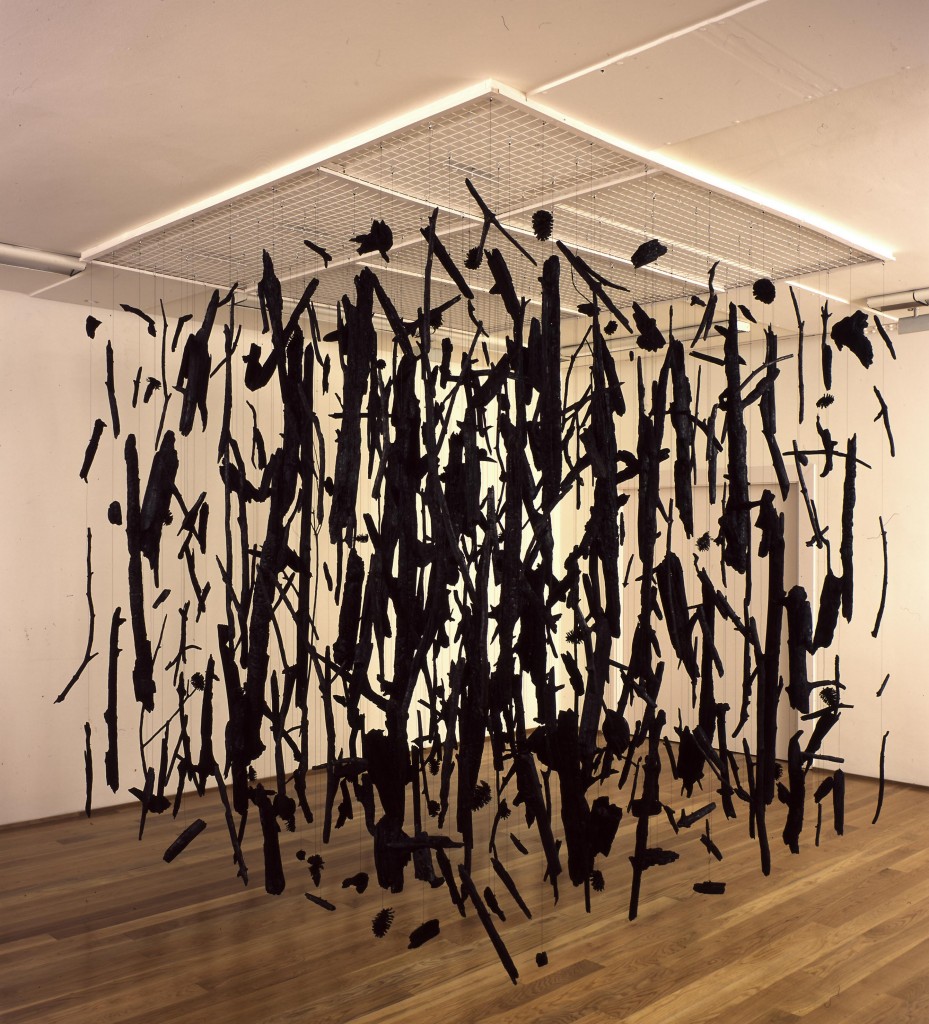 Cornelia Parker Heart of Darkness, 2004Charcoal from a Florida Wildfire (prescribed forest burn that got out of control) 323 x 396 x 323 cm Courtesy of the artist and Frith Street Gallery, London
In a similar vein, Cornelia Parker’s ‘Heart of Darkness’ (2004) is just as ominous, if not more explicit in its depiction of the level of destruction humans are capable of. This captivating installation of the ghost of a burnt forest was made by gathering the charred remains of trees burnt down in a fire in Florida. Like many, it was intended as a controlled burn but was powered by strong winds and transformed into an uncontrollable wildfire. Charcoal-black twigs, branches and pinecones are delicately strung together with thin string, almost lovingly suspended from the ceiling. With this fragile installation Parker has had a chance to ‘resurrect’ the destroyed forest by giving it a new life in an exhibition space. Yet the message here is far from hopeful: it is urgent and powerful, as it highlights the impact of humans’ environmental recklessness and, more specifically, in Parker’s words, the ‘disastrous consequences of political tinkering’.

Finally, Kris Martin’s ‘100 Years’ (2004) is by far the most alarming piece on show at the Royal Academy. An inconspicuous, small gold-coloured ball, it lies on the floor of one of the exhibition rooms. It resembles a glorified cannon ball – graceful with the perfection of its shape. However, as the curious viewer approaches to read the label on ‘100 Years’, its terrifying, ‘hidden’ message emerges: the sculpture has been primed to self-explode 100 years after its creation. For those of us who have never truly been confronted with a bomb, except perhaps on screen, at a safe, fictitious distance, it is a shocking discovery. It has the power to shake us and, perhaps more than other works, awake us to the catastrophic reality of climate change.

There are those who choose to believe the majority of scientists that the rapid rising of temperature is caused by us, and those who choose to believe the sceptics and trust that it is nature’s doing. Whatever we believe, though, the one fact which remains undisputable is that climate change is happening and that unless it is drastically reduced, we will have a fate not dissimilar to Martin’s gold ball.