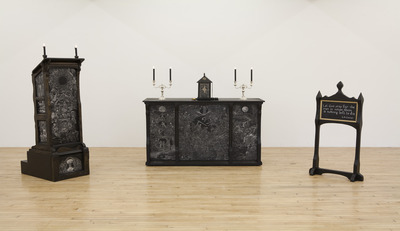 The Church project consists of a chapel installation created by JMF Casey and commissioned by 20 Hoxton Square Projects. Throughout the duration of the exhibition there will be a series of performances, involving sermons and music in collaboration with writer and academic Emile Bojesen.

The Church uses the aesthetics of religion and ritual to deal with contemporary philosophical issues and ideas of faith. Conceived as a home for a modern mystical sect operating outside the limitations of mainstream “rational” atheism, The Church explores the potential of cross-discipline art practices, conveying a more engaging and poetical approach to existential problems.

JMF Casey’s practice was born from a natural propensity toward images of a morbid, violent or melancholic nature, a tendency that he seeks to understand and enrich through extended research. These investigations have led him towards increasingly ominous and esoteric subject matters, illustrated with imagery drawn from an array of sources, including gothic art, war photography, horror films and pornography. Primarily executed in monochrome scratch painting, his work alludes to poetic, historic or philosophic concepts. Akin to Baudelaire’s proclaimed task of extracting “Beauty from Evil”, his practice is concerned with the amoral redemptive quality of art.

JMF Casey has previously exhibited at Shunt, Nog and was also included in 20 Hoxton Square Projects group show in 2008. As well as various artist run collaborations and exhibitions, he was also featured in issue 4 of Le Gun magazine, in 2008. In 2007, Casey self-published his debut artist book, Symphonie Fantastique.

Thursday 12 November: VIP / Press evening with performances from 7pm
More performances to be announced – for further information and updates please go to www.20hoxtonsquare.com