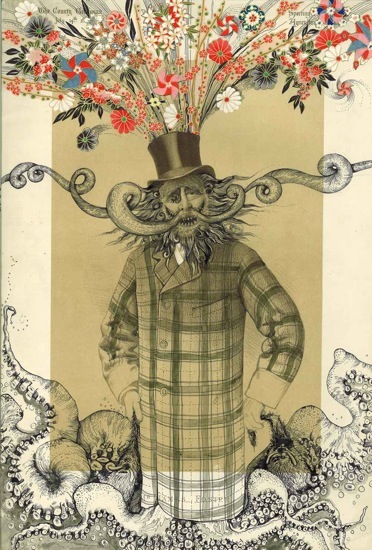 BEARSPACE is delighted to present ‘Ultimate Love Story.’ This is the first soloexhibition by artist Isabel Rock. BEARSPACE will become the location for Rock’s investigation of human behavior through a series of works layering drawing, print,collage and other intriguing media. Isabel Rock states of her work ‘I use distortedanimals as a metaphor for human relationships to create a world inhabited by these lecherous slobbering beings, ever ready to consume.’

Isabel Rock creates a parallel world to our own reality-where as Rock describes,‘animals can talk, midgets have four eyes, and birds have dogs’ heads.’ The fruitionof this parallel world creates a space for Rock’s creatures to interact with each othermaking nightmarish, surreal fairy tales for the viewer to observe. However, humour isnot to be missed in the work as it breaks the tedium of everyday life. The cohesive
theme for ‘Ultimate Love Story’ is that of relationships. The exploration of physical,mental and imaginary ways these different types of relationships unravel.

This series of works incorporate printmaking, spray paint, collage, gold leaf and toyparts, to create a strange opulence. In contrast to their subject matter, these worksecho traditional printmaking techniques and elements of design, whilst maintaining a strong conceptual framework. The chaotic, ‘Hullaballoo in the Lapsang Souchong’was influenced by Japanese animation, graffiti, comics, Bosch, Dürer, romantic
novels and daytime chat shows. ‘Ultimate Love Story’ uses contemporary life to build layers into the work.
Isabel Rock feels ‘reality is boring.’ The artist’s influences are drawn widely from folklore and mythology, from Grimm’s Fairy Tales and Rabelais to romantic novels and trashy magazines like ‘Pick Me Up’, where human life is dramatised to a surreal level. At times, her work goes as far as to draw upon more theoretical textsincluding Freud’s theory of infantile sexuality and the subconscious.